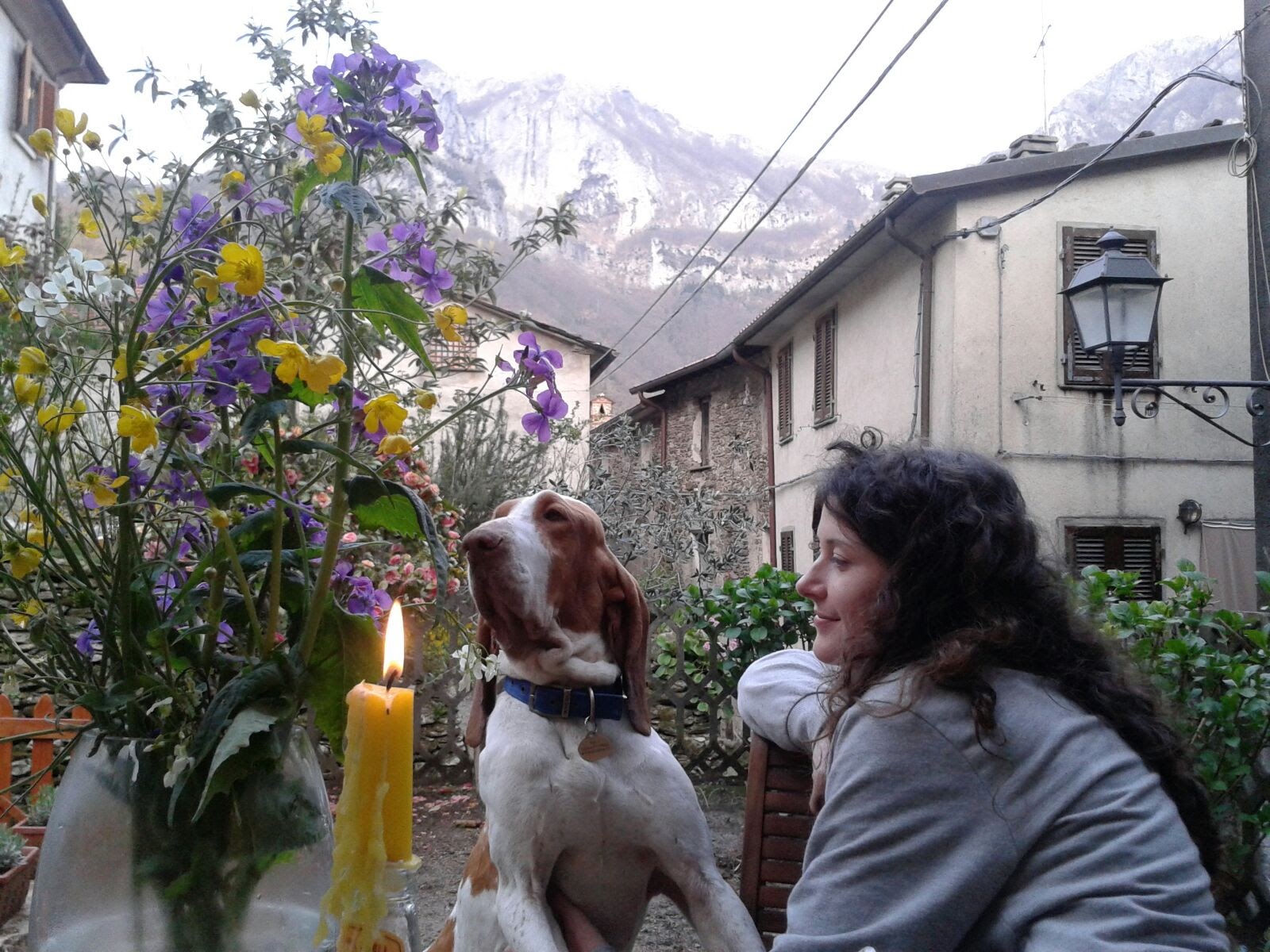 We set off from Tuscany at 6 o’clock in the morning, reaching Milan around ten. The whole journey I kept checking the photo on my phone as the landscape became flatter and the hills receded into the distance.

‘I wonder what he’ll do when he sees us!’

The beautiful orange and white Bracco, strong and handsome – I checked his photo one more time. I was like a child at Christmas.

The sat nav told us we had arrived. We pulled into the rescue centre.

Growing up we always adopted our dogs from Dogs Trust Darlington and I used to love going along to see the dogs and take food and bedding for them. Dogs Trust Harefield, the rehoming centre closest to London’s Head Office where I worked was a newer, even slicker version of the yellow and black haven I’d grown to love. Fifi, who was currently being cared for by a neighbour while we made the eight hour round trip to Milan, was adopted from Battersea Dogs and Cats Home. Dogs Trust and Battersea: The Hiltons of the rescue centre world.

The rescue centre in Milan was not The Hilton. It wasn’t even a Travelodge.

It was a great big field and in it running wild was a pack of around twenty dogs.

It took ages for the kennel staff to separate him from the others and put him on lead. He was skin and bone, displaying avoidance behaviours. He wouldn’t look at us.

I’m not criticizing the rescue centre. Like many small organisations they were doing the best they could with limited resources and it was of course The Hilton compared to where he’d come from.

It had just been his third birthday the microchip told us. Ruben went off to complete the adoption forms with the kennel staff, leaving me alone with Lao.

I held his lead and gingerly tossed a few pieces of hotdog his way. There was a weird creeping disturbed feeling in my stomach; this dog was not well. I gently lifted his lips. I knew I shouldn’t have as all my training told me it could have ended in a bite and rightly so – but curiosity got the better of me.

Stumps level with the gum line and a mouth full of broken teeth.

‘Certo ha due anni?’ I cautiously asked when the kennel staff returned. ‘Are you sure he’s three years old? He looks different to the photo.’

All the way home he wouldn’t look at us. We didn’t look at him, wanting to put the least amount of pressure on him as possible.

The bright Milanese day turned into grey skies, thunder and driving rain as the car climbed back up to the gloomy mountains. We met the neighbour in the arranged neutral place, all of us soaked to the skin to introduce the new dog to Fifi. His eyes stayed to the ground, Fifi showed little interest.

Once home he ran straight to the fireplace and didn’t come out all night.

We took him to the garden on lead to toilet. I rang my vet in the UK. He still didn’t look at us.

There he stayed for two weeks: shut down and living in a fireplace. I wondered if he wanted to die.

But no. He ate! Wow did he have an appetite!

I came to suspect that although his previous owner had been abusive, he had at least been decently fed as he looked healthy in the adoption photo. I can only suspect that when he was turned out with the large group of dogs at the rescue facility he didn’t get enough food. He also possibly had bad experiences with the other dogs. That would account for the difference in body condition and fear of his own species as well as humans.

If you’ve followed us for a while you’ll know the rest of the story but here it is again.

Before Lao was handed over to the rescue centre by a vet who refused to put him to sleep because he didn’t hunt well enough Lao lived in a hunting kennels in Southern Italy. His natural desire to chase prey was therefore very strong and I was struggling to find a safe outlet for his predatory instincts.

He would also bark and lunge at people and dogs to scare them away, even biting them. He chased rabbits, birds, anything that moved. We started to keep him on lead and our daily walks became less stressful at least – but they were also boring. Lao seemed unfulfilled and frustrated. I felt guilty.

Back in the UK I started seeking our weird and wonderful places where he could be free to run, sniff and play. Several times I thought I’d found the perfect place… then I’d turn up one morning to find that someone had got there first. My search became more extreme, the places more isolated. I didn’t always feel safe.

A prayer was muttered every time the muzzle went on and the lead came off, never knowing when he would come back. Yet I risked it. Every time. Because I hated the idea of this energetic dog who loved running free being constantly restrained.

‘If we can just get through this one walk without seeing a dog…’ you know the script.

I loved Lao so much but he was affecting my quality of life and my relationships as my obsession for finding off-lead spaces became evermore extreme and ridiculous.

The morning I was late for work because Lao followed the scent of some unseen creature for half an hour, the fear and panic I felt made me realise that it could never happen again. I was at my wit’s end. Something had to change.

How could I help this funny, sweet and affectionate but incredibly fearful dog live a fulfilled life? There seemed to be just one solution.

If my friends and family didn’t think I was mad already, they did now. If I said I wanted to open a private hire dog exercise field they probably would have understood more. But we didn’t buy the field to start a business; its purpose was to solve a huge problem in my life.

The first time I unclipped Lao’s lead in the field that would eventually become Dogwood West, I knew that our lives had changed for the better.

He didn’t stop running – he explored every centimeter of hedgerow – he sniffed every particle of scent from the long grass.

With regular visits to the field I watched his confidence grow. Once a nervous and reactive mess, Lao is now able to walk past many different dogs at a comfortable distance.

He is happy to meet new people and we enjoy scentwork and parkour together. He is a visibly happier dog and I am a relaxed owner. The twice-daily dread of the impending walk, the excuses and apologies, the after-hours walks and bizarre locations are now a thing of the past. What Lao and I have achieved most dog owners take for granted, but to us we have moved worlds.

It was a warm evening after closing time, the birds were twittering as they settled for the night, the sun setting over Bishopton purple orange and gold. I stood watching Lao roll around on his back, his comical long ears flew, his legs kicked in the air. His body and mind were free.

If we’d had a safe space to let Lao off when we first adopted him, to bond with him and test his recall we could have avoided the bites, the disappearing acts, the trauma.

I want you and your rescue dog to experience the same fear-free, off-lead experience as I now have with Lao at Dogwood Adventure Play, the North East’s first dog adventure park.

Your dog was born to run and play, and at Dogwood you can give him what he needs whilst you can enjoy a brand new, relaxing, stress-free adventure walk with your best friend.

In her previous role as Campaigns Officer at Dogs Trust she travelled across the North of England offering training, behaviour, enrichment, health and legal advice to hundreds of dog owners every week and developing new campaigns for responsible dog ownership.

A strong advocate of rescue dogs, Katie volunteered at Battersea Dogs Home before joining the Dogs Trust Head Office team where she helped deliver the campaign to parliament for compulsory microchipping which was successfully passed in 2016.

Katie works hard to improve the lives of the dogs she meets on a weekly basis and believes that reward-based training and enrichment are key to a strong and long-lasting relationship. 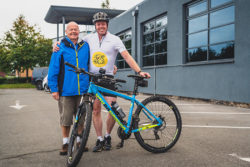 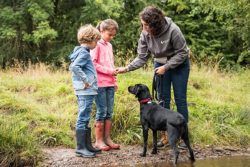